From BergerHealer Wiki
Jump to navigation Jump to search
This page contains changes which are not marked for translation.
Other languages:
English • ‎Español • ‎中文

TrainCarts allows you to perform actions on trains or single cars using signs.

A sign is always structured the same way. The first line contains either *cart* or *train* depending on if you want to target each cart separately or the train as a whole. It is worth to note, that not every sign allows targeting of a single cart.

Signs can either be powered by or activate Redstone themself.
Some signs may require you to power them using Redstone. Some common examples are stations or spawners. In order to power them will you just need to put a power source next to the sign. A power source can be Redstone dust (Doesn't require to point into the sign), levers, buttons, etc.
If you want to have the sign to be always active without the usage of Redstone can you either add an exclamation mark (!) or a plus (+) in front of train or cart, becoming [!train] and [!cart] respectively. Note that both will alter how the sign may output a Redstone signal itself. For the exclamation mark will the input and output be inverted and for plus will it be constantly active while ignoring any outside Redstone input.

In addition, may a sign also power Redstone, by having a lever attached to the block they are attached to themself. When a specific action is performed (i.e. a Trains stops on top of a station sign) will the lever be activated, allowing the Redstone or Redstone Component to get powered. As mentioned above, would using an exclamation mark before train or cart invert the Redstone state it would give. An active state would not give out any Redstone signal while an inactive will.

You may further change what cart/train is targeted, by adding a colon (:) after either cart or train, followed by one or multiple direction(s). For example, [train:lr] on a switcher sign would activate a lever when a train enters from either the left or right direction and doesn't for the remaining ones.

A few sign systems support remote control: the ability to control trains by name. You then use the [train <name>] format, or the shorter alias [t <name>]. Remotely controlled signs only respond to redstone changes, thus where you place them is not important. So far the property, destination, destroy, eject and setblock sign systems support remote control.

Remote control can also affect multiple trains. Just like the tag system, remote control uses *-signs to identify the trains to affect. For example, the following remote control sign will set the destination to home for all intercity trains:

You can use this to recall all your trains easily. If you use tags to navigate trains, you can also add a tag saying that the train should return. Remote control signs only respond to redstone changes. 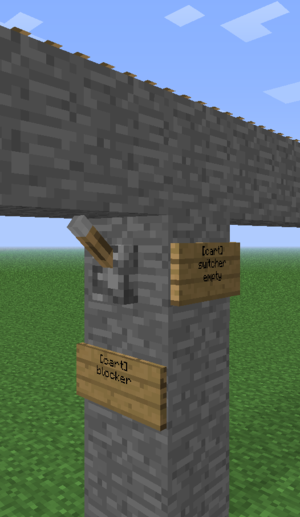 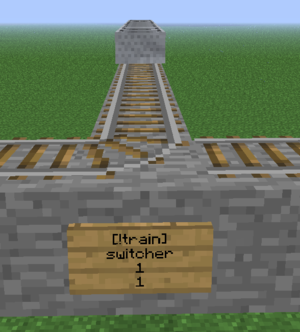 Trains are switched left and right using a 1:1 counter

You can make a pillar of blocks below a single track piece and attach signs to it, to make a bundle of actions on a single track piece. Trains look down when they enter a new track piece to check for signs, so make sure you put the output signs above the signs that use this output for correct results.

A noticeable exception would be add-ons for the TrainCart plugin, which may change the (relative) position a sign would need to be placed on in order to work for the track. For example, would the TC Hang Rail add-on require you to add the signs above the Hang rail track to work, while the TCC (TrainCarts Coasters) add-on uses the block of a node for the sign, which can be moved to any other block.

For most signs the sign direction influences what happens: